Pillars of the Philippine educational system

The Gabaldon schoolhouse can be found in almost every city and municipality in the country. From the time Rep. Isauro Gabaldon authored Act 1801 alloting P1 million for the construction of schools all over the country, these heritage schools were built all over the country up to the beginning of the Second World War. But earlier American-period schoolhouses are also considered part of this genre of built heritage resources.

Each structure followed one of several standard designs prepared by architect William E. Parsons. These school buildings became the foundations of a national educational system that gave every Filipino child the chance to acquire a formal education. They are testaments to the early efforts of our leaders to raise the consciousness of the youth, the future leaders of our nation. Gabaldon schoolhouses thus form an important part of the architectural heritage of the Philippines. 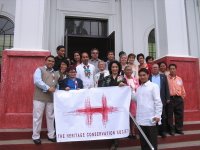 Realizing the importance of these buildings, the Department of Education approved the proposal of the Heritage Conservation Society to restore several of these heritage schoolhouses as a legacy to future generations of Filipino school children who will study under their historic halls. To date, restoration on three buildings have already been completed namely the Rizal Elementary School in Bacolod City, the Baguio Central School, and the Pampanga High School in the City of San Fernando, Pampanga. More buildings are up for restoration as well under the DepEd-HCS Heritage Schoolhouse Restoration Project.

However, due to the sheer number of Gabaldon schools all over the country and the lack of funds to restore these buildings, not all can be included in the program. This blog was thus created to bring to public attention other fine examples of these schoolhouses in the hope that generous donors, individuals or institutions would sponsor their restoration. We thus invite everyone to send us photos and articles of Gabaldon schoolhouses in their own localities for inclusion in this blog.

The Mayor of Lipa City, Mayor Sabili has recently destroyed the Gabaldon Building located at Barangay Bolbok, Lipa City without prior consultation and approval of the sangguniang barangay, nor prior clearance from the Department of Education. This building has withstood the test of time for more than a century and had served the community for eons.

Query, is there minimum qualification for constractors who would like to participate in the bidding for the restoration of a gabaldon school building?

in iloilo the building has withstand through the years and it saved the koreans in world war 2 because of gabaldon.....

Filipino authorities are great. They ensured that Fildipan children received at least a formal minimal education. And this in turn means the education of the youth and the future generation.

The Filipino authorities are fantastic. They made certain that Fildipan children received at least a basic formal education. This, in turn, implies the education of the youth and future generations.

The Philippine educational system is in need of major reform. The quality of education is poor, and the dropout rate is high. Class sizes are often large, and there is a shortage of qualified teachers. Many schools lack basic facilities, such as libraries and laboratories.